Travel Tip:  Sometimes you need to put the camera away and just soak in the experience.

The cry rang out from the port side of our large rubber raft within a minute of leaving Lahaina Harbor.  Jack, the naturalist on our excursion, had promised a free soda to the first person who spotted a breaching whale.  We whipped our heads around at the sound of the lucky passenger’s shout and were treated to the sight of, not one, but two enormous humpbacks leaping into the air and crashing back into the sea.

Rob and I had dreamed for years of visiting Maui to seek the humpback whales that fill the waters here every winter.  Unlike the hunters of old, our riches would come in the form of photos and memories.  We didn’t have to hunt very far to find our treasure.  As soon as we checked into our hotel room, I dashed out to our balcony to scan the ocean surface.  Within minutes, we saw several whale spouts.   Every day of our week-long stay brought numerous sightings of spouts, flukes, pectoral fins, and the occasional excitement of a breaching whale landing with an enormous splash.

Four of the Hawaiian islands in this area – Kaho’olawe to the south, Maui to the east, Lana’i on the west, and Moloka’i to the north – form a shallow bowl of water about 300 feet deep.  The humpback whales use this warm, safe lagoon to give birth to their calves.  They nurse their babies for about a month before embarking on the long journey to the cold and food-rich waters of the northern Pacific.  The warm waters of the tropics do not sustain the krill and small fish that make up the diet of these baleen whales. These dedicated mothers must go for three or more months without eating while they make the long migration to Hawaii and raise their calves.  Finally, the calves are strong enough to join their mother for the trip back to summer waters around Alaska.

I was surprised to learn that the presence of humpback whales in Hawaii may be fairly recent.  I had assumed that they had migrated here for centuries because of the favorable conditions.  But in spite of the fact that Lahaina town was a hub of whaling activity in the mid-19th century, there is no record that the whalers in Hawaii were hunting humpbacks.  Some naturalists believe that the humpbacks were driven here as a result of hunting pressures in other areas.

Our guide Jack also shared the good news that the recent history of the humpbacks is a great success story.  By the mid-1960s, hunting had reduced the number of northern Pacific humpback whales to about 1,000.  As a result of the International Whaling Commission’s ban on commercial whale hunting in 1986, the population has increased to about 20,000.  Up to 7,000 of that number visits the Maui channel between the months of December and March, making whale sightings almost inevitable.

Not content with spotting spouts from our balcony, Rob and I had signed up for two whale-watching excursions during our week-long stay, one with Ultimate Whale Watch and the other with the Pacific Whale Foundation.   Both of these organizations were excellent, and we particularly admired the Pacific Whale Foundation for their conservation efforts. 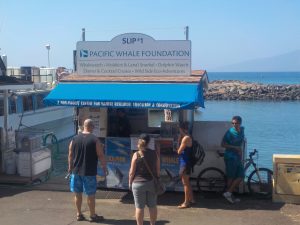 For both, we chose the smaller powered rafts holding 18 to 20 people, rather than the big vessels that carry crowds of whale watchers running from one side of the ship to the other to check out the most recent sighting.  Our smaller crafts allowed us to look the whales right in the eye as they rose out of the water to investigate the strange tiny creatures invading their territory.  Although the laws prohibit boats from approaching the whale closer than 100 yards, nothing prohibits these curious creatures from approaching the boats, so we had several exciting encounters with whale groups quite close to us.

Both excursions were magical.  Small groups of whales surrounded us – typically a mother, her calf, and an “escort,” the male who accompanies a female humpback in the hopes of fathering her next calf.  We viewed many of the typical behaviors of these active whales.  These included:

Our final thrill came, not from the sight, but from the sound of the whale.  When Jack lowered the hydrophone into the water, I hoped for at least a single mournful cry. What I got was a symphony of whale song.  The air was filled with loud squeaks, deep grunts and ghostly moans, constant chatter between the whales that went on for several minutes.  Whale Song

I tried for a while to get photos of these beautiful creatures, but most of their appearances were so sudden that I usually succeeded only in getting a shot of a large splash as the whale returned to the water.  Finally, I decided it was best to put the camera away and just soak in the moment.  The best images from this trip are not the blurry photos of fins or flukes, but the vivid images living in my memories.